PAS activist, Wan Ji was arrested in Shah Alam at around 2.00 a.m. early this morning.

Wan Ji Wan Husin is a former committee member of Selangor PAS’s Ulama wing and a vocal critic of religious authorities and mainstream teaching of Islam as well as our Sultans.

At the 1:40th minute of the video, Wan Ji gave his name as an example of people to be arrested to make people hate the Sultans.

Now, PKR Youth made a statement that they condemned the arrest as reported by an opposition media, The Malaysian Insider (TMI).

“We are committed in demanding that the government listen to the voice of the people to repeal the outdated and cruel act. At the same time, we will also assist Wan Ji with legal aid if he is charged in court,” said a statement issued by the movement’s committee member, Zafril Eusoff – TMI.

He has since been charged with sedition for having allegedly insulted the Sultan of Selangor in a Facebook post on November 5, 2012, The Star Online reported – Malaysia Today.

So, listening to the above video, it seems like this is part of Wan Ji’s plan to abolish of the monarchy in order to make Malaysia a republic by 2030.

Malaysian must remember that the states in Malaysia is made up from individual states ruled by Malay Sultans and the Sultans are the rulers of Malaysia.

It is against the Federal Constitution to insult the Sultans, moreover to create a plan to abolish the monarchy.

The Selangor MB, Tan Sri Khalid Ibrahim will be meeting the Sultan of Selangor tomorrow to ask for the Sultan’s advice regarding the Selangor’s MB crisis.

He also said that the meeting will take place at 3.20 p.m. and he will be holding a press conference at 4 p.m. tomorrow.

The location of the press conference will be announced soon.

So, PAS has got the information from the palace that Wan Azizah might not be accepted by the Sultan of Selangor to become the Selangor Menteri Besar?

With this statement, it proves that PAS knows that Wan Azizah might not be accepted by the Sultan.

So did Haji Hadi agree to nominate Wan Azizah as the MB because he knows that the Sultan will not accept her?

If the answer is “yes”, it means that Haji Hadi is smarter than Anwar Ibrahim because agreeing to what Anwar wanted is just like a trick by Haji Hadi.

But if PAS received the information about how the place feels about Wan Azizah, it is almost impossible for Anwar to not be informed about it.

Surely Mat Sabu or Khalid Samad or other Anwaris must had told Anwar about it.

So, why must PKR and DAP keep insisting that Wan Azizah is the one and only candidate for the MB post?

Now, will the Selangor PKR and DAP state executive council members resign or will they be willing to take orders from the MB whom their parties describe as corrupted and not fit to remain as the MB of Selangor?

The Malaysian Insider reported that:

Selangor Menteri Besar Tan Sri Abdul Khalid Ibrahim said today that executive council members (exco) who were unhappy about working with him were free to resign.

He said PAS had already announced that its four exco members would continue working in the state government under him, and added that this figure was enough to conti‎nue with the exco even if the remaining six PKR and DAP exco members stepped down.

But he added that he would interview the state executive counsellors tomorrow to find out if they were still willing to work under him.

“If they feel, if it’s in their own conscience that they will not be a part of the menteri besar’s team, then I think it’s best for them not to continue,” he told a press conference at the state secretariat building today.

He said that as menteri besar, he had the authority to recommend to the sultan that ‎the exco line-up be changed, but added the exco should decide for themselves if they wished to step down. – August 11, 2014.

The consent was met earlier today in a meeting at Istana Alam Shah Klang.

Khalid said that the meeting held earlier was to inform the Sultan of his dismissal from PKR on August 9.

“The Sultan asked whether I can still command a majority support in the state assembly to which I said I do.

“The Royal Highness then adviced me to continue serving the state as the Menteri Besar and I will remain so until further notice,” he said during a press conference at the state secretariat building.

In regards to support from the state executive council members, Khalid said that the support from four PAS Exco members allowed him to continue to command the state.

“In accordance to article 52 2 (B) in the state constitution, the Menteri besar needs to have cooperation from at least four members of the Exco to continue leading the state.

“The support from PAS has allowed me to retain the command,” he said.

When asked whether he still command a majority support from the state assembly, Khalid said that people are open to test it.

Khalid however said there will be no emergency state assembly and the next sitting will be in November for the tabling of the state budget.

He said that he will meet with the remaining Exco members from DAP and PKR who had earlier vouched to follow the orders of their respective party to not support Khalid. The meeting will take place tomorrow.

“Under the article, the Menteri Besar has the authority to advice for any unwilling and uncooperative Exco members to be removed from their post.

“And if the Exco members from DAP and PKR would still want to follow orders from their party, then I can advice for them to be removed,” he said.

The prospect of joining PAS is still in consideration but before any decision can be made, Khalid said he will answer to all the allegations made against that was aimed to tarnish his image.

“Before I can consider joining PAS, I need to be sure that I am clean from any allegations so as not to bring any unwanted baggage with me.

“I will seek legal actions against those involved with the campaign to smear my image,” he said

When asked whether he would consider forming a unity government with assemblymen from the opposition, Khalid said, “Now is not the moment to think about that, the matter of running the state is more important right now,” he said – NST

During the sworn in ceremony as the Menteri Besar of Selangor on May 14, 2013, Tan Sri Dato’ Seri Abdul Khalid Ibrahim gave his pledge on 10 Aku Janji or undertakings including:

Then the Allah issue was brought up again:

(Please click here to read more about the issue) 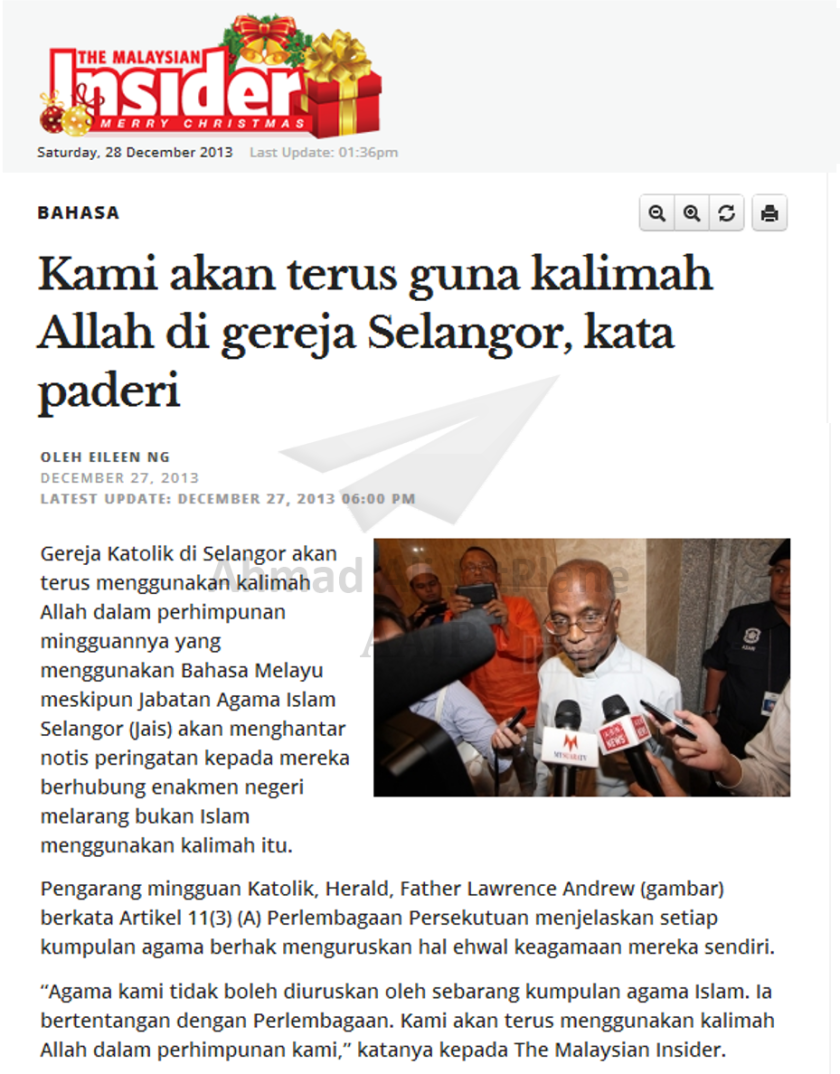 Have all these people of Selangor forgotten that the Sultan of Selangor had made a decree and the Malaysian Court of Appeal has ruled that in Malaysia, Allah is the proper name for the Muslim’s God and cannot be used as a common name to translate the gods of other religions?

Why can’t they all learn to become good and fair citizens and obey the rules?

For example, DAP’s Hannah Yeoh, the Speaker and a member of the Selangor State Assembly made lots of statements regarding this matter which do not respect the Sultan of Selangor’s decree, Selangor Non-Islamic Religions (Control of Propagation Among Muslims) Enactment 1988 and Article 11(4) of the Federal Constitution of Malaysia.

And another three DAP’s assemblymen even want to make changes to the Selangor Non-Islamic Religions (Control of Propagation Among Muslims) Enactment 1988 as reported by Malaysian Insider:

“Three Selangor assemblyman have called for a state law passed during the Barisan Nasional rule to be amended to ensure non-Muslim rights are protected as guaranteed by the Federal Constitution.State assemblymen Yeo Bee Yin, Rajiv Rishyakaran and Lau Weng San, representing the state constituencies of Damansara Utama, Bukit Gasing and Kampung Tunku respectively, said they would propose the changes to be made on the Selangor Non-Islamic Religions (Control of Propagation Among Muslims) Enactment 1988, at the next state assembly sitting.”

I wonder what will the Selangor’s Menteri Besar do?

So far he has not taken any action to stop DAP from making all kinds of statements against the Sultan of Selangor’s decree.

Has Tan Sri Khalid forgotten the 10 Aku Janji or undertakings that he  pledged on May 14, 2013?

But if he ignore Hannah Yeoh and other DAP’s leaders, DAP, PKR and PAS leaders will surely won’t be happy with him; and may cause them to force Tan Sri Khalid to resign his position as the Menteri Besar.

But how about the undertakings that he pledged?

An honest man will keep his words and will not betray the pledge that he made.

The Selangor PR State Government didn’t invite the Selangor Ruler, the Sultan of Selangor to the official Selangor Merdeka celebration.

It caused headlines and PR started to blame others 🙂

So why did the Menteri Besar does not invite the Sultan? ❓

The Selangor Menteri Besar political secretary, Faekah Husin was asked about this issue.

Does PR thinks that Sultans must ask for an invitation to attend their own states’ official functions from their state governments?

Has PR forgotten about our Rukun Negara and our Federal Constitutions?

People said that PR does not want our sultans anymore.

Is it true that PR wants to turn Malaysia to a republic?