“I am a Malay first!” stated Tan Sri Muhyiddin Yassin as he accused DAP’s Parliamentary Leader, Lim Kit Siang’s statement as “to put a wedge between the Prime Minister and the Deputy Prime Minister.”

That happened six years ago when Tan Sri Muhyiddin was still the Deputy Prime Minister and the, “I am a Malay first” was regarded as a heroic statement by the members of UMNO, in accordance with UMNO’s spirit of “alif, ba, ta (agama, bangsa dan tanahair)” or religion, race and nation.

Below is the video of his statement originally released by MalaysiaKini’s KiniTV.

But now the former Deputy Prime Minister seems to change his mind.

He joined Tun Dr. Mahathir to team up with the enemies of UMNO who are against Islam, the Malay rights and the Federal Constitution such as Lim Kit Siang, Tony Pua, Teresa Kok, Tian Chua, Ambiga Sreenevasan, Maria Chin, and others.

By teaming up with those enemies of UMNO, he is now against his own party and what he said six years ago.

When he said, “I am a Malay first”, it automatically means he is also saying that he is a Muslim first because according to the interpretation of Malay in the Clause 2 of the Article 160 of the Federal Constitution of Malaysia:

“…“Malay” means a person who professes the religion of Islam, habitually speaks the Malay language, conforms to Malay custom…”

So how could he becomes teammates with Lim Kit Siang and happily sharing a couch with him?

Has Tan Sri Muhyiddin forgotten that Lim Kit Siang had rudely made a malicious accusation that a verse from the Quran, the verse 120 of Surah Al-Baqarah caused religious hatred and blamed JAKIM for using the verse in a Khutbah Jumaat?

By teaming up with Lim Kit Siang who is clearly against Islam and the Malay rights, Tan Sri Muhyiddin is now against his own principles of Malay first.

His other new teammate, Tony Pua among others had humiliated the law and principals of Islam by making fun of the Islamic view regarding Valentines Day.

In his Chinese New Year video, Tony Phua again makes fun of the Muslims by mocking a Saudi Arabian Muslim in a very humiliated ways.

Another new teammate of Tan Sri Muhyiddin, Teresa Kok had ordered the Jawi script on road signs of Jalan Bukit Bintang and Jalan Taman Seputeh to be abolished. 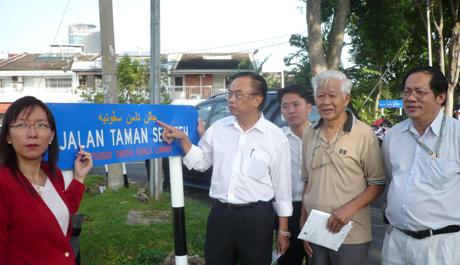 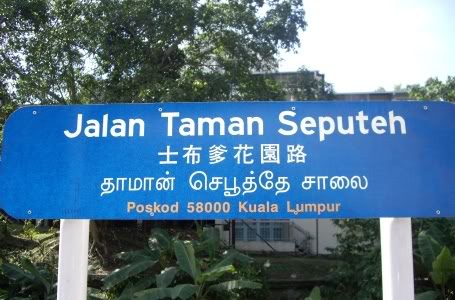 Jawi is the original script of the Malay language, and the Malay Language is the national Language according to the Article 152 of the Federal Constitution of Malaysia.

Tian Chua who is another of Tan Sri Muhyiddin’s new teammate, on February 2013 made a malicious and uncalled comment about the Lahad Datu standoff saying that the death of ten policemen and soldiers from our PDRM and ATM including nine Malays who were protecting Lahad Datu was just a “sandiwara UMNO” or a theatrical staged by UMNO as a conspiracy to distract and scare the people because of the general election. Ambiga and Maria Chin are both Bersih leaders that organised illegal demonstrations against the government, creating havoc and disorder and promoting the anarchy ideology which is against the principals of the Malay and Islam.

They, who are also behind COMANGO, are fighting for the LGBT rights which is against Islam apart from fighting for parts of the Islamic laws to be abolished.

What Bersih and COMANGO are fighting for are against the Federal Constitution as Islam is the religion of the Federation. 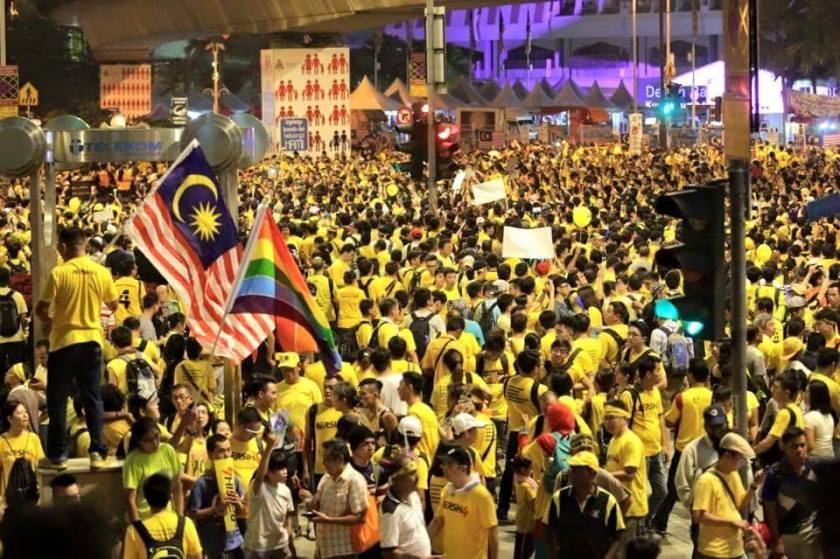 Tan Sri Muhyiddin whom once claimed to be a Malay first, whose religion must be Islam, has now become teammates with people who are against Islam and the special rights and position of the Malays and the Bumiputras.

Maybe now he has changed his mind about being a Malay first for, on the 27th of February 2016, he made a new statement:

Isn’t it weird that just because he is against the Prime Minister, his personal principals and views have changed and he is now teammates to the people who are trying to destroy his party that had once made him a Deputy Prime Minister?

His actions hurt the Malays and UMNO members who had voted for him.

The Bersih 4 demonstrators left trash around the city of Kuala Lumpur after their illegal demonstration ended.

When warned that the organisers of Bersih 4 could be asked to pay a RM65,000 clean-up bill, its leader, Maria Chin told Malay Mail Online that:

“We haven’t receive anything yet but it’ll be disappointing if it comes because it is the duty of DBKL to clean up and our volunteers tried our best to clean up as much as possible.”

“They also forget that it is DBKL’s duty to clean up the city so they should be cleaning up anyways.” – The Malay Mail Online.

How could Maria Chin made such a rude and unfair statement?

Does she has any respect for the DBKL workers?

They are not Bersih’s employers who were paid to clean up after their illegal and dirty demonstration.

Of course, it is DBKL’s duty to clean up the city; but littering in the city is an offence and those who litter can be fined.

So, it is an offence for the demonstrators to leave trash around the city after their illegal demonstration, but instead of taking her responsibility as a leader, Maria told DBKL to clean up as if they are employed by Bersih.

She is responsible for the mess left by the demonstrators of her own illegal demonstration but she is putting the responsibility on others.

Bersih demands for a fair election but Bersih’s leader is not a fair person; in fact her statement shows that she is a very irresponsible person.

She must learn to be fair to others before asking others to be fair.

The demonstrators should be ashamed of themselves to have such a leader if they are sane enough to think wisely.

Not only they participated in an illegal demonstration and litter on the streets which is against the law, their leader does not feel sorry and has no respect for the DBKL workers for the extra works caused by them; just because, “it is DBKL’s duty to clean up the city so they should be cleaning up anyways.”

I think the organisers should call their illegal demonstration Kotor 4 instead of Bersih 4 because not only they do not understand how to obey the law, they also fail to understand that others do not like them to dirty our city.