PRIME MINISTER NAJIB RAZAK STATEMENT ON MH370
Utusan – On 8 March 2014, flight MH370 from Kuala Lumpur to Beijing disappeared. The days, weeks and months that followed have been a period of torment for the families of those on board.

The plane’s disappearance was without precedent. At every stage, we followed the tiny amount of evidence that existed. But, despite the efforts of 26 nations and the largest search in aviation history, from the South China Sea to the Indian Ocean, the plane could not be located.

Neither could investigations by the world’s leading aviation experts answer why MH370 veered off course and went dark. While the plane’s disappearance remained a mystery, we have shared the anguish of those who could find no comfort.

Last week, on 29th July, we were informed by the French authorities that part of an aircraft wing had been found on Reunion, the French island in the Indian Ocean.

Today, 515 days since the plane disappeared, it is with a heavy heart that I must tell you that an international team of experts have conclusively confirmed that the aircraft debris found on Reunion Island is indeed from MH370.

We now have physical evidence that, as I announced on 24th March last year, flight MH370 tragically ended in the southern Indian Ocean.

This is a remote, inhospitable and dangerous area, and on behalf of Malaysia I would like to thank the many nations, organisations and individuals who have participated in the search.

The burden and uncertainty faced by the families during this time has been unspeakable. It is my hope that this confirmation, however tragic and painful, will at least bring certainty to the families and loved ones of the 239 people on board MH370. They have our deepest sympathy and prayers.

I would like to assure all those affected by this tragedy that the government of Malaysia is committed to do everything within our means to find out the truth of what happened. MH370’s disappearance marked us as a nation. We mourn with you, as a nation.

And I promise you this: Malaysia will always remember and honour those who were lost onboard MH370.

KUALA LUMPUR, Malaysia (AP) — Australia’s prime minister said Thursday that two objects possibly related to the missing Malaysia Airlines flight have been spotted on satellite imagery in the Indian Ocean and an air force aircraft was diverted to the area to try to locate them.

The Orion aircraft was expected to arrive in the area Thursday afternoon, Prime Minister Tony Abbott told Parliament in Canberra. Three additional aircraft are expected to follow for a more intensive search, he said.

Abbott called it “credible information,” adding that after “specialist analysis of this satellite imagery, two possible objects related to the search have been identified.”

But Abbott cautioned that locating the objects could be extremely difficult and “it may turn out that they are not related to the search for flight MH370.” 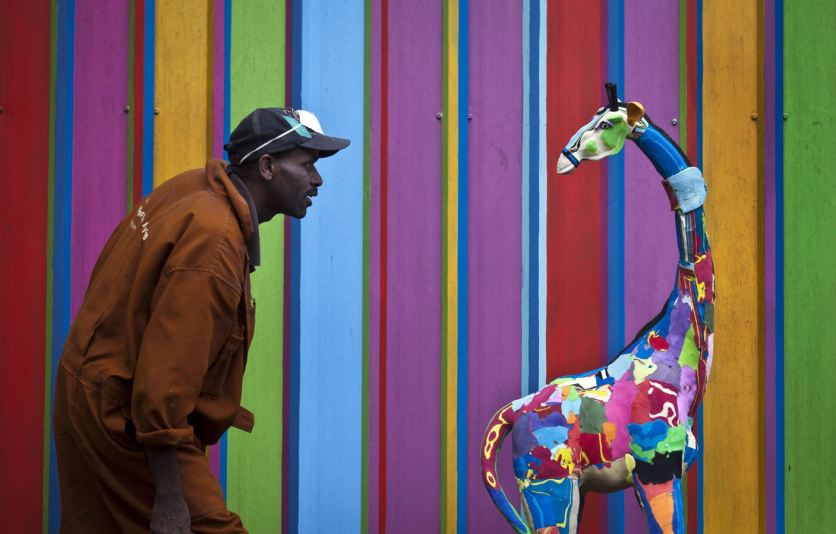 In this photo taken Monday, April 29, 2013, carver Jackson Mbatha, 40, poses next to an unfinished large toy giraffe he is making from pieces of discarded flip-flops, in front of a painted workshop wall at the Ocean Sole flip-flop recycling company in Nairobi, Kenya. The company is cleaning the East African country’s beaches of used, washed-up flip-flops and the dirty pieces of rubber that were once cruising the Indian Ocean’s currents are now being turned into colorful handmade giraffes, elephants and other toy animals. (AP Photo/Ben Curtis)

There are lots of discarded flip-flop slippers washed up on Kenya beaches everyday.

A small company in Nairobi is collecting those discarded footwear and recycling them into colourful and cute toys.

To me, it’s a very nice idea for it won’t cause extra pollution from factories to make new toys.

Here are some photos …

The first earthquake hit Indonesia and it could be felt even in Malaysia.

According to CNN, the Pacific Tsunami Warning Center issued a tsunami watch for the entire Indian Ocean but was lifted later.

Next, another eartquake hit Mexico.

The USGS said the first quake on Wednesday evening in the western state of Michoacan had a magnitude of 6.5 and was recorded at a depth of 12.4 miles.

It was followed by a second earthquake, of a magnitude of 6.9 and at a depth of 6.2 miles that hit somewhere near Baja California early Thursday morning.

Earthquake is a disaster but luckily both earthquakes did not caused any tsunami.

(CNN) — Somali pirates have released a Malaysian tugboat and 11 crew members after holding them for more than seven months, an international business group reported Monday.

The tug taken by pirates on December 16 has been released and is en route to a “safe location,” according to ICC Commercial Crime Services — the anti-crime arm of the International Chamber of Commerce.

The ICC said it will not release additional information until the boat and crew have reached their destination and are out of harm’s way.

It was unclear whether a ransom had been paid and it was not immediately known when the ship was released.

The waters off Somalia are rife with pirate activity, despite increased measures by military forces and shipping companies to ward off attacks.

Heavily armed pirates have struck the busy Indian Ocean shipping lanes and the Gulf of Aden, which connects the Red Sea to the Indian Ocean.

They have captured dozens of vessels and hundreds of hostages, making off with millions of dollars in ransom money.

Pirates attack people in the seas and oceans.

I think there are too much crime in the world now.

If I can go to the United Nations, I’ll tell all the people to stop the crimes and wars and ‘make the world a better place’ like what Michael Jackson sang in his song,’Heal The World’.

Crime and war are disaster.