[CNN}- The Italian city of Venice is seeing its worst flooding in decades, prompting local authorities to submit a request for a state of emergency to the country’s central government, after an unusually high tide inundated the city on Tuesday.

Tides of 140 centimeters (55 inches) or more are known as “acqua alta” in Italian, and generally take place in winter time, according to Venice’s municipality website. The high tide on Tuesday peaked at 187 centimeters (74 inches), according to a statement from Venice’s government Wednesday morning.

It is the worst flooding in Venice since 1966, when the city was hit by tides up to 194 centimeters (76 inches), according to government statistics.

On Tuesday, the Tide Forecasting and Reporting Center of Civil Protection said that 45% of the city was flooded. 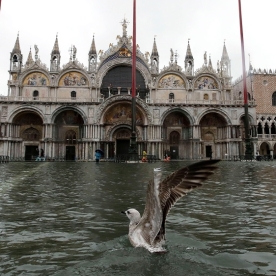 A seagull in a flooded St Mark’s Square, in Venice on Tuesday. The high tide or ‘acqua alta’ peaked at 187cm (6.1 inches). [Luca Bruno/AP Photo]

The entrance to St. Mark’s Basilica is flooded on November 12.Luca Bruno/AP

The high tide is seen near the Rialto Bridge in Venice.Luca Bruno/AP