[Yahoo! News}- A filthy vehicle can be incredibly unsightly but one street artist is turning them into incredible pieces of art.

Nikita Golubev regularly uses his talents to transform dirty vehicles in Moscow, Russia, sharing photographs of the huge artworks he creates on Instagram.

His popularity has surged on the site, and has now attracted more than 55,000 followers.

Mr Golubev often uses his unusual art to make social or political comments about serious issues such as war and pollution.

Other times, he uses his interest in science fiction and fantasy to create stunning images to liven up the city-scape.

Here are a selection of the artwork that can be seen on the roads of Moscow.

The stunning drawings are complex and detailed. (CEN) 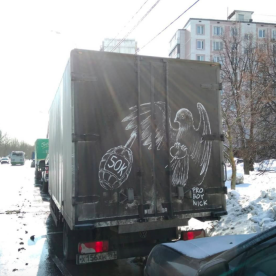 War and pollution are themes that Mr Golubev often uses in his drawings. (CEN) 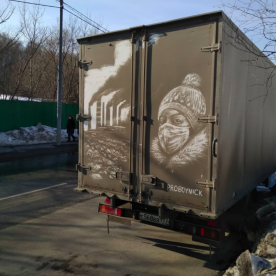 Vehicles are transformed from their dirty appearance to moving pieces of art. (CEN)

The sides of lorries provide an even greater canvas to work with. (CEN) 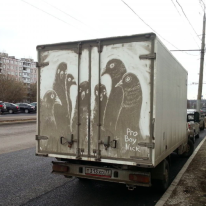 Mr Golubev prefers to create his art on lorries as their greater size gave him a bigger area to work on. (CEN)

Driving behind this particular drawing may be a little intimidating. (CEN)