We came across a popular restaurant named ‘Restoran Kari Kambing 40 Hari’ on our many trips to Johor but only on 5th of August 2016, I had the chance to eat at the restaurant.

The restaurant is situated along Jalan Yong Peng – Ayer Hitam and from what I saw whenever I passed the place, the restaurant was always full; so we assume  the food must be very delicious.

It is a self-service type of restaurant, where plates of foods are placed on a counter for us to choose, except for the roti canai that has to be ordered.

When we arrived the restaurant there was already a long queue, and to the matter worse, the lady at the food counter was rather rude to the customers.

And as for the food, the roti canai was very, very delicious but the kari kambing which was too sweet, was not as good as what we were hoping for.

Anyway, we did not try the Nasi Arab.

Is it worth for us to drive away from the highway just to eat at the restaurant?

Well, at least from now on, we are satisfied that we have tried the kari kambing at the ‘Restoran Kari Kambing 40 Hari’ whenever we the pass the restaurant as we drive along the PLUS highway.

An explosion occurred at Chelsea, Manhattan, injuring at least 29 people on a Saturday night.

The explosion which happened at around 8:30 PM at the 23rd Street between Sixth and Seventh Avenues was said to be an international act, and is not related to terrorism.

A possible secondary device was located a few blocks away on 27th Street, between 6th Avenue and 7th Avenue, but was then removed by authorities.

Police said the device was to be detonated at the NYPD’s firing range in the Bronx.

According to ABC News, the mayor said the Chelsea explosion has no apparent connection to the explosive device that detonated in Seaside Park, New Jersey, Saturday morning. Nobody was injured in the New Jersey incident, which occurred at a time when a 5k run to benefit U.S. Marines and sailors was scheduled, but the race was delayed because so many runners had signed up.

Below is the surveillance video which shows the incident, credit to ABC News.

I received this special present from Uncle Zul Noordin a day after he flew to Jeddah.

Since Uncle Zul is in Mekkah for Haj, the book was sent to me by Pak Cik Rusdi.

It is a very special book because it is very hard to get this book in Malaysia, and my father had been searching for this book every time we go to the book shops.

Uncle Zul bought me this book during one of his overseas trips and I’m so happy because Uncle Zul always remember me even though we have not met for months.

Thank you, Uncle Zul, may Allah bless you always and thank you again for the other book.

PAS previously said that it is still unsure if it would join the opposition bloc that is led by DAP to fight against the government, Barisan Nasional.

Now, isn’t it clear for PAS that it should not work together with the opposition bloc that is led by DAP?

I really hope that PAS will make a wise decision.

On the 10th of September 2016 at around 9:50 PM, my grandfather, Haji Ahmad bin Omar passed away peacefully at my house.

He was buried at the Tanah Pekuburan Islam Bukit Teratai, Cheras on the morning of 11th September.

My grandfather was a politician, he was an ADUN of the DUN now known as Bukit Payong during the 1960s.

It is very sad that my Atuk is not with us anymore.

The human rights lawyer in a very loud voice said that she is against the move to amend Act 355 which she said is an attempt to empower the Syariah Court.

She went on saying:

She rudely pointed her middle finger as a sign of insult to those who do not agree with her loud speech.

Now, she pointed her middle finger and claimed that she is a Muslim, aren’t she ashamed of herself?

Her actions insult the Muslims because it gives the image that Muslims are rude when in Islam it is wrong to insult others.

Is the Bar Council happy with this kind of behaviour shown by its member in a public event?

Tengku Razaleigh or better known as Ku Li is a good friend of my grandfather during their student days in England.

Ku Li is a soft-spoken gentleman and would always greet me with, “Apa khabar?” and a warm smile.

In December 2013, I took a photo with Ku Li after a Friday prayer to show to my grandfather who was in Kuala Terengganu at the time, the photo of his good friend.

After three years passed, I took another photo with Ku Li at the same spot outside of the prayer hall after our Friday prayer.

A photo of Ku Li and I, after our Friday prayer in December 2013. 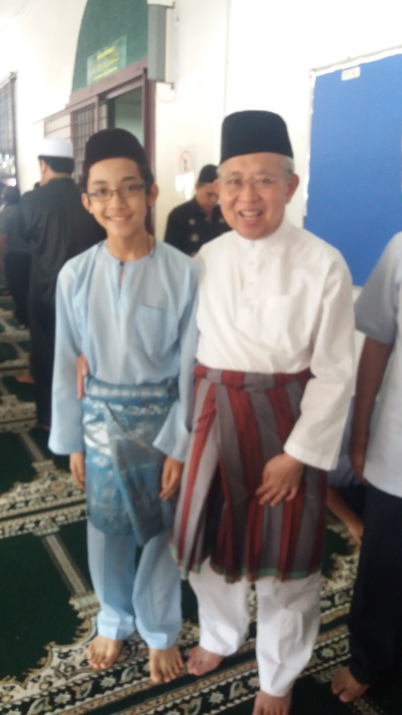 It’s quite interesting looking at how different I look when I took the last picture with him compared to the current photo.

I was obviously shorter than Ku Li in the first photo, but now after three years, I am almost as tall as he is, and Ku Li looks as energetic and joyful as ever.