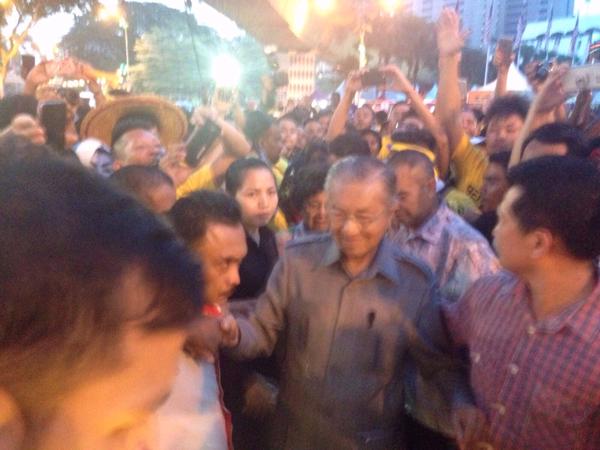 Tun Dr. Mahathir became the Prime Minister because UMNO won the general election; but what has he done now?

Is it fair for him to be at the illegal demonstration that was powered by DAP, the opposition party that does not respect Islam as the religion of the Federation, against the Article 153, hated the Sedition Act that protects the 4 sensitive issues and trying to erase the history that Malaysia was born from Tanah Melayu?

He tarnishes his own dignity and integrity as a Muslim leader because we know who is behind Bersih.

The enemy of my enemy is my friend?

As a Muslim, Tun must understand that, the end could not justify the means?

Tun lost his credibility as an UMNO leader by showing his support to the people who hated UMNO and openly humiliate UMNO.

He knows that the people behind Bersih are also fighting for LGBT rights, against Article 153, slander JAKIM and the Sultans especially the Sultan of Selangor.

Mahathir does not mind hurting the Muslims who supported him and he does not mind to put himself down to the level of LGBT fighters just because he hates Prime Minister Najib and wants to put him down.

Tun Dr. Mahathir, “Kalau marahkan nyamuk jangan bakar kelambu”; do not destroy our country just because of your hate for Najib.

Revenge is bad and I do not believe in revenge.