Opposition leaders call UMNO leaders and members racists and boasted that Pakatan leaders and supporters are open minded and against racism. 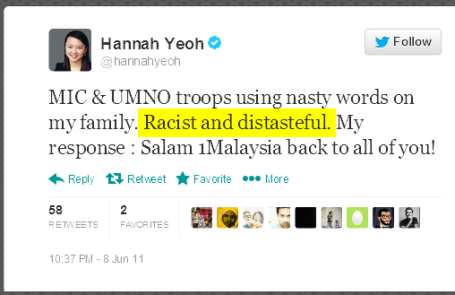 As we drove around Kajang on the election day of the N25 Kajang, we saw lots of party supporters by the roadside waving their parties’ flags, especially around the voting centers.

The Muslim PKR supporters shouted to my parents that they must vote for PKR’s Wan Azizah because she is a Malay Muslim and must not vote for BN because BN’s candidate is a non-Muslim and a Chinese.

After we put on the BN T-shirts that were given to us by the BN’s team, a lot of PKR supporters shouted bad and foul words because they said that we are supporting a non-Muslim.

Some old men even stuck their tongues out at me, which is very rude.

Will Hannah Yeoh call them racist and tweet about it?

But of course Hannah Yeoh won’t call them racist because they are Pakatan members and supporters!