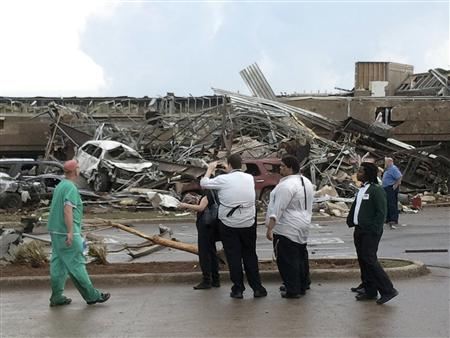 People look at the destruction after a huge tornado struck Moore, Oklahoma May 20, 2013. A huge tornado with winds of up to 200 miles per hour devastated the Oklahoma City suburb of Moore on Monday, ripping up at least two elementary schools and a hospital and leaving a wake of tangled wreckage. At least four people were killed, KFOR television said, citing a reporter’s eyewitness account, and hospitals said dozens of people were injured as the dangerous storm system threatened as many as 10 U.S. states with more twisters. REUTERS/Gene Blevins (UNITED STATES – Tags: ENVIRONMENT DISASTER)