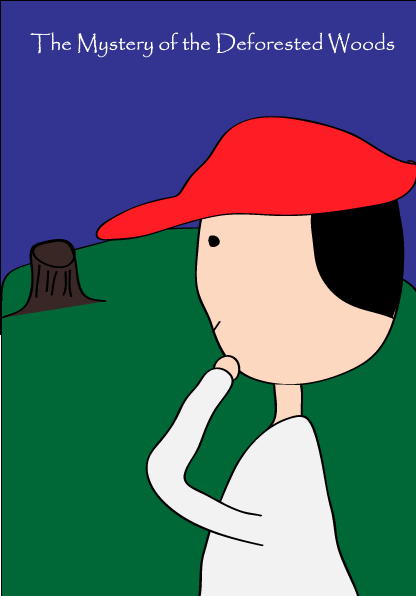 Please click here for, ‘The Mystery of The Deforested Woods (Chapter 5: Interviews)

They rushed to the woods to investigate. As they were about to reached the woods, they saw a man walking behind a big tree. The man saw them and he disappeared among the trees and the kids lost him. Luckily, Pete managed to take a picture of the man before he ran away. They walked further into the woods, hoping to get some clues. But there was no clue at all and they did not see anybody else.

Pete said, “Reen and I are going to stay over here. We’ll stay on guard and try to get another photo of the man as a clue if he comes back. Mic and Safora, you’ll both go to the police station and tell the officer what had happened. Take this photo and give it to the officer,” said Pete giving Mic the photo of the man they saw walking behind the big tree.

So they went separate ways, Pete and Reen hid under some thick bushes while Mic and Safora ran to the police station. After a while, the man came back. He tripped by one of Reen’s clever traps and fell down to the ground. Pete could see the design of his shoe sole and immediately he drew it in his notebook. He also took another picture of him.

Anyway looking at the man’s right hand, he found out that the man had no pointy right thumb. Suddenly the man spoke to someone. Then Pete and Reen heard a nice and soft voice and in came two more men, one looked kind of European and the other one looked smaller in size. They took out their chain saw and started to cut the big tree in front of them.

Pete was shocked, for in front of him was the German friend of his together with the small, slim and dark skinned man with white hair who they met earlier. So, it was Frederick and the other man who cut down the trees! Pete was puzzled, but what about the hand prints with pointed thumb that they saw? Frederick and the other man did not have pointed thumb. Carefully, Pete and Reen walked out from the woods. Nobody heard or saw them because of the loud clattering noise and the men were too busy cutting down the trees.

“Reen,” said Pete in a low voice as they walked away from the woods. “So, it was a team of three men working together. It was Frederick,  the small, slim and dark skinned man with white hair who we met earlier and the man that we’ve just saw. The design of his shoe sole matches the one that we saw on the first day we came to the woods to investigate this case. Thanks to your clever trap, Reen. So, now we know who had cut down the trees. Come on, we should go to the police station now, It’s getting late and … look!” said Pete excitedly. ” The police officer is already here together with Mic and Safora. Let’s show the new pictures to the police!”

Please click here for The Mystery Of The Deforested Woods (Chapter 7: Mystery Solved)

7 thoughts on “The Mystery of The Deforested Woods (Chapter 6: The Actions)”