Written And Illustrated By: Ahmad Ali

In Calovinia, King Sakiorone was having a big feast. Everyone was happy except Sir Hanianon. He was frustrated because they were defeated every time they attacked their enemies.

A month later, one of the Arguay’s scouts went to Calovinia asking for help. The Calovinian king agreed to help the Arguays so they could test their new weapon. He sent a troop of army and they brought along the Dardanelles Guns. The Dardanelles Guns were great weapon and they defeated the armies of Jupron.

At that moment, Uanuf Ali and 50 other great knights of Calovinia were hiding at the back of the king’s tent. They came inside and Uanuf Ali said to the king, “Do not count your chickens before they are hatched”. Uanuf Ali was one of the grandsons of the Calovinian king.

The Jupron attacked them but the Calovinian knights defeated the Jupron. And then it was the time for a duel between Uanuf Ali and King Antire the 20th.

Suddenly Queen Yarmadurna and Prince Lamandor of Jupron rushed into the tent to attack Uanuf Ali. But one of the Brotosh armies who had just arrived saw them and he stopped them from attacking Uanuf Ali.

King Antire the 20th went to hide in one of the rooms inside his castle. Prince Lamandor tried to attack Uanuf Ali again but Sir Hanianon pulled Uanuf Ali to safety and they went back to Calovinia.

A few days later, while Sir Hanianon was hunting, he met three tired and hungry villagers asking for help. They told Sir Hanianon that they ran away because Jupron’s armies was going to attack their village. Sir Hanianon helped them and after that he asked the villagers where did they came from.

One of the villager’s daughter named Aymijah answered, “Kalapaga”. So he went to Kalapaga with several other knights to help them defend their village from Jupron’s attacks. By the time they arrived there, the place was already under attack and Jupron armies had destroyed a large part of the village. 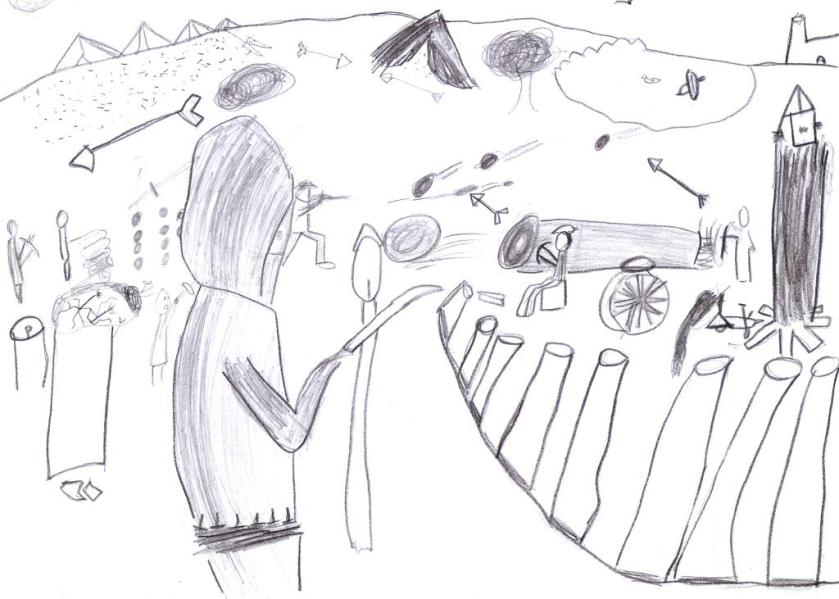 Sir Hanianon and the other knights helped to defend Kalapaga. But it was too late and Kalapaga was defeated. Sir Hanianon told them, “Don’t worry, the darkest hour is just before the dawn”.

One thought on “The Adventures of Hanianon (Episode 3: The Hard Day Part 1)”