It happened during lunchtime when lots of people were in the city and kids were in their schools.

Christchurch is the second biggest city in New Zealand.

This is a terrible disaster.

Christchurch was hit by a 7.1 magnitude earthquake in September 2010 but nobody was killed.

The U.S. Geological Survey said the earthquake was centered 3 miles (5 kilometers) from the city at a depth of 2.5 miles (4 kilometers).

A lot of buildings were collapsed, burying lots of vehicles.

People were trapped in collapsed buildings.

The police said there was a report of two buses crushed under falling buildings.

Roads were cracked and destroyed.

There were also reports that some parts of the roads were swallowed together with the cars.

The earthquake also caused fire and some part or the city was flooded when the pipes burst.

The Christchurch airport is closed.

I am very sad and sorry for the earthquake victims and their families.

I hope that the school buildings are okay and the kids are not hurt. 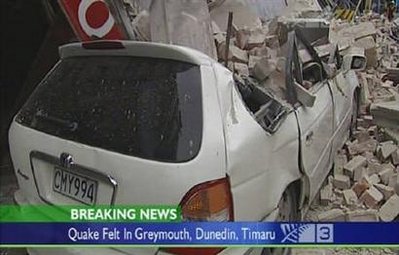 A car crushed by rubble from collapsed buildings is pictured after an earthquake in Christchurch, New Zealand, in this February 22, 2011 image taken from video footage. REUTERS/TV3 via Reuters TV