A magnitude 8.8 earthquake hit Chile followed by a tsunami.

Buildings, roads and bridges were damaged.

This is the 7th strongest earthquake in the world.

The president of Chile, President Michelle Bachelet said at least two million people were affected and 214 were killed.

Highway overpasses collapsed on the road and cars were thrown away.

The president declared ‘areas of catastrophe’. 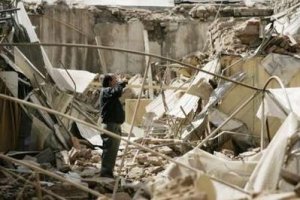 A town named Chillan that was destroyed in the 1939 earthquake is one of the most effected.

Santiago is the capital of Chile.

The Santiago airport is shut down for at least the next 24 hours.

Tsunami waves were reported in the countries around the Pacific Ocean.

Boats were thrown ashore, buildings were damaged and some areas were flooded. 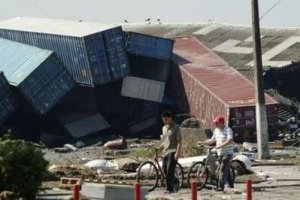 In Talcahuano, Chile the waves were as high as 7.7 feet.

On the island of Juan Fernando the tsunami waves killed 3 people and 10 were missing.

Tsunami activities is reported as far as in Tasmania, Australia.

CNN reported a 9 feet high tsunami may hit Japan and tens of thousands of people has been evacuated.

There have been lots of powerful aftershocks; one with a magnitude of 6.9.

In Argentina a 6.3 magnitude quake killed 2 people in separate towns.

There have been lots and lots of damage in Concepcion.

Any way things are not as bad as the aftermath of the 7.0 Haiti earthquake.

I am very sorry for the victims in this natural disaster.

I think we should build high quality buildings with air bags to protect the buildings and people during earthquake.

Chile is in South America.

At least 6 people were killed.

This is a very powerful earthquake.

May be more people were killed.

The earthquake was located near the city of Concepcion.

Concepcion is the second largest city in Chile.

There are reports of collapsed building in Santiago.

So far CNN has not reported the destruction in Conception.

The Pacific Tsunami Warning Center issued a tsunami warning for Chile and Peru.

Tsunami watch has been issued for Ecuador, Colombia, Panama and Costa Rica.

The center recorded a tsunami wave as high as 9 feet.

According to USGS the largest earthquake in the world was recorded in Chile.

This is a real disaster and I am very sad to learn about this news.

I hope that we can stop the earthquakes.

Okinawa was hit by  a 7.0 magnitude earthquake.

Japan’s Meteorological Agency issued a tsunami advisory to the people in the Okinawa Islands, Amami Islands and Tokara Islands.

They should avoid the beaches and the sea.

So far CNN said they haven’t received any news about the damage or casualty on the islands.

Anyway, I guess the aftermath will not be as bad as in the Haiti’s earthquake.

On 12 January 2010 Haiti was hit by a 7.0 magnitude earthquake that almost destroyed Port-au-Prince and killed hundreds thousands of people.

Earthquake is a natural disaster.

I think we must avoid earthquake.

A killer whale killed a trainer at SeaWorld Shamu Stadium on Wednesday afternoon.

A witness said that a whale named Tilikum jumped up and grabbed the trainer into its tank.

Killer whale is a type of dolphin.

People from the Ethical Treatment Of Animals said killer whales are smart and oceangoing mammals.

They want people to stop keeping the killer whale in tanks and made them perform silly tricks over and over again.

I agree with them because the killer whales may get angry and kill other people.

I think the killer whale did not eat its trainer.

It must be a sad day at SeaWorld and the trainer’s family must be very sad.

Yesterday I was reading about food in my science book.

There was an instruction to draw our favorite food.

This is my drawing.

Mr. Food is made out of food.

His face is an apple 🙂

His eyes and nose are grapes 😕

His ears are strawberries 😡

His hands and feet are ‘sambung nyawa'(Gynura procumbens) 😳

His body and hair are lettuces 😆 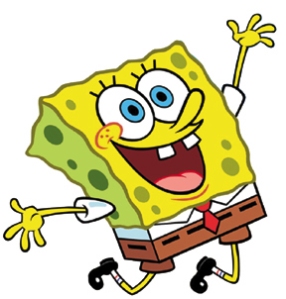 SpongeBob SquarePants is a very popular animation story from Nickelodeon.

His best friend is Patrick Star.

SpongeBob is very popular in Malaysia.

The characters are not very polite to each other.

In fact sometimes they are rude.

And I can’t learn anything by watching the series 😕

I like to watch ‘Barney and Friends‘ because Barney teach me good manners.

I learn Spanish from ‘Dora The Explorer‘.

I can learn about animals from ‘Go Diego Go‘.

I learnt how to make a forest bird sound from one of the episodes.

Wonder Pets teach us to think fast and how to work together.

I learn a lot from Sesame Street.

However I think the drawing of flowers around ‘Bikini Bottom’ are very nice.

On Thursday my father bought me a new pair of shoes

We bought the shoes at Carrefour, Wangsa Maju.

My new shoes are very beautiful

The colours of the shoes are white, blue and a little bit of yellow 😉

My old shoes are already too small for me 😕

Anyway I love the old shoes.

They are very cute.

I am sad because I can’t wear them again.

Last Thursday when we jogged, I wore them on the wrong side.

It is near my house in Ampang.

The park is very beautiful.

There is big lake in the middle of the park.

And there are a lot of fishes in the lake.

There is a jogging path around the lake.

I always jog over there.

We have to go there early in the morning before it gets too hot.

After jogging I would play at the playground.

Playing at the playground is fun too

On Thursday my father bought me a pair of jogging shoes.

It is another present for my birthday

I can’t wait to jog in my new shoes.

Actually my old shoes were already too tight.

Last week my father, my sister and I went to buy fried banana.

Then we saw an owl nearby.

We walked straight to the owl to take a closer look

Anyway owl does not looked like a ghost at all 🙂

In fact I think owl is cute.

Owl has a heart shaped face.

By the way that owl looks like its owner 🙂

So owl is only active at night.

I hope I can meet the owl again.